Most people associate Genetically Modified Organisms (GMO’s) with plants such as eggplant or corn, but there might be more genetically modified animals introduced into the market for human consumption. The field of genetic engineering has always been a promising and a debated field of science at the same time. Scientists have been modifying the DNA structures of plants to get favorable traits for decades, and they are continuing to alter and find new ways to insert genes for specific traits into the DNA structures of plants and animals, for faster and higher crop yields.

“Genetic engineering is changing the food we eat and the world we live in.”- Altered Food, GMOs, Genetically Modified Food – National Geographic. According to the article The Intensifying Debate Over Genetically Modified Foods – State of the Planet, 70% of the foods we get from the supermarket contain some sort of GMO ingredients in them. We have no idea if we are eating GMO food because currently it’s not required by law in all states to label foods containing GMO’s.

The debate over whether or not genetically modified food is safe for human consumption has become more and more controversial today. Vermont was the first state that passed a law in May 2014 that requires labeling on all food containing GMO’s. The State of Connecticut has also passed a similar law to label food containing GMO ingredients, but the law will not take effect until the contiguous state and four other states pass the same law. Maine, along with 25 other states has already introduced labeling legislation for GM foods.

Some of the companies are not happy with State’s decisions to make Genetically Modified food labeling a law. A leading producer of GM seeds, Monsanto has threatened to sue states that pass laws involving GM food labeling. 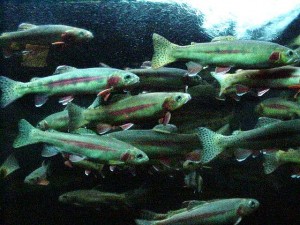 After almost two decades, FDA may rule in favor of GM salmon. The FDA has completed its analysis of the genetically modified salmon, the AquaAdvantage, made by Massachusetts-based AquaBounty Technologies, Inc., will be the first genetically modified animal for human consumption, likely to hit supermarket shelves soon. According to AquaBounty, the fish grows 2-6 times the normal size of an Atlantic salmon, in half the time. They also found this technology promising for restoring the wild salmon stocks in the ocean; salmon is a heavily over fished species, which is at a threat to become endangered.

The FDA’s statement, which seems to be favorable regarding the environmental effects of the salmon, has been passed on to the White House’s Office of Management and Budget.

Questions and concerns from consumers

Even with FDA approval, there is a growing concern among the general population and environmental activist regarding the environmental impacts of the salmon. The salmon producers assured that these genetically altered fish will be grown in land locked containers, and not be able to breed in nature, even if some of them were to get loose in the environment by accident. AquaBounty has developed a way to make the fish sterile, which will prevent them from spreading their genes.

However, there is a growing list of supermarkets that say they will not sell the salmon, including the two food super giants, Safeway and Kroger, who joined the list in March of 2014, because there is a growing concern whether consumers will buy food with GMO labels on them, despite the FDA approval. 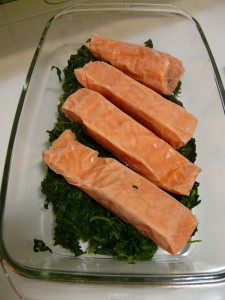 The issue is highly controversial among fishermen in Alaska, various environmental groups, select super market chains, and consumer watchdogs who have been strongly opposing the product ever since AquaBounty applied for approval in 1996. According to the Center for Food Safety | News Room, 1.8 million people sent comments opposing the FDA’s decision to approve GM salmon.

Dana Perls, a policy campaigner at the environmental organization Friends of the Earth sates “Before we say we’ve come up with a way to feed the growing population, what are we putting at risk in exchange?” We really need to know the full long term, and short term dangers associated with any product that comes into the market before we start consuming or distributing any product.

P.S: – Please put down your thoughts on GM food in the comment box below. Don’t forget to share.