Salmon is a unique kind anadromous fish that are born in the fresh waters of rivers and streams. They swim to the ocean as they grow older and return to their home stream to lay eggs when the time comes for spawning. Every year, millions of salmon return to their home stream and produce their next generation of fish. Some species of salmon make several trips in their lifetime, while others make just one round trip before they die. For the last few decades, the number of salmon making it back to their fresh water mating grounds has been declining. The population of salmon species in the Northwest, from Alaska to Washington State, in the waters of the Pacific and in the North Atlantic Oceans is constantly declining.

Salmon is a popular food in the United States, and is classified as an oily fish, recommended for a healthy diet. Salmon is produced in aquaculture in many parts of the world and Salmon farming is wide-spread. 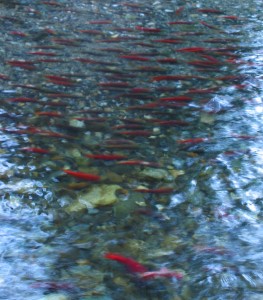 Rivers and streams of the Pacific Northwest used to be full of salmon, only a decade ago. Today in the states of California, Washington, Oregon and Idaho, salmon are extinct in nearly 40 percent of the rivers they were known to inhabit — at least 106 major stocks gone forever (source: Northwest Power & Conservation Council).

It is not only in the United States, but ocean stocks of salmon are declining all over the world. Global Atlantic salmon catches fell 80% from 1970 to 2000. (Source: What’s depleting salmon populations? – HowStuffWorks)

According to the WWF, there has been a 50% worldwide decline in Atlantic salmon over the last 20 years (WWF – Salmon (European & Pacific). In November 2006, the journal Science published a four-year study which predicted that, at prevailing trends, the world would run out of wild-caught seafood in 2048. (WikipediA)

What is causing the depletion of the salmon population?

The major cause of the salmon stock decline has been due to human activities. Environmental factors such as change in global climate and natural disasters also play a role.

Salmon has been a main source of protein and livelihood for millions of people around the world. Thousands of years ago, Native Americans along the Pacific and Atlantic coasts of North America were building societies that revolved around salmon; salmon became their means for survival, commerce, and an important part of their religion (Water Encyclopedia).

With the advancements of civilization and technology across North America and the settlement of the fertile river valleys, salmon harvesting became a big business. Salmon was caught and processed in large quantities using an array of modern harvesting techniques. Commercial fishermen and fisheries used long nets to seine the rivers and estuaries . Some fisheries used “fish wheels” which were baskets powered by river current, to scoop migrating salmon out of the water and on to the fishing boats. And finally, the building of dams on the rivers estuaries in the 1900s put an end to the massive salmon runs. Today, less than less than 1% of salmon return to the river to spawn.

There are several factors contributing to the decline of salmon stocks in the oceans. On the West Coast, it is widely believed that the four major factors of salmon 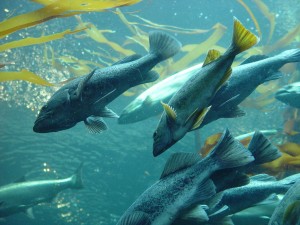 Human activities and over fishing has put a major impact on the salmon population.

Due to urban growth, industrialization, deforestation, unplanned farming, and pollution have put a strain on salmon stocks. Chemical contamination from the runoff industrial waste and agricultural activities are also causing decline of salmon in their juvenile, freshwater phase.

Hydropower dams make it impossible for juvenile salmon to migrate downstream and the adult salmon are unable to ascend to the spawning grounds of their native streams. 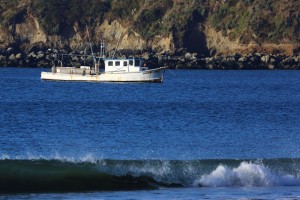 Although pollution, logged forests, dams and runoff from agricultural activities and industries have destroyed many of the spawning grounds and habitat of salmon, scientists believe that there are still many more freshwater habitats left that can be nurtured and improved to have a significant number of salmon survive and thrive.

Several habitat restoration programs and regulation efforts are being undertaken to assist in recovery. The spraying of pesticides containing nonylphenols has been stopped on eastern forests. (Water Encyclopedia)

The greatest benefit to salmon would be the removal of dams, reduction of pollution, regulation of unplanned ocean fishing, controlling ocean traffic and finding alternate methods for hydroelectric power generation and sustainable methods of agriculture where ever possible. Reducing pollution and unethical methods of agriculture would not only benefit the ocean stocks of salmon but all living creatures and ecological beings that survive in nature.

We urge all local and federal government agencies and also concerned individuals to take steps towards natural habitat conservation and promote sustainable practices in every possible way to restore the declining salmon population.