Growing food in vertical gardens in multiple layers, in buildings and on rooftops is becoming popular today in many of the developed countries around the word. Countries such as Switzerland, Germany and China, particularly Hong Kong, have already made headlines around the globe by increasing their food production with urban farming and feeding their increasing urban population, using rooftop fisheries and vertical agriculture techniques. Rooftops across the world are being used to produce vegetables, fish, chicken and other farm products successfully. A rooftop fish farm can really boost local food production as well as local economies by producing fish and vegetable using an integrated aquaponic system.

Aquaponic techniques need very little space and resources compared to land based agriculture. When food is produced in different layers, there are possibilities of growing several types of crops in the same facility. An aquaponic system also utilizes waste from one system to feed the other, so the waste is minimized and the use of resources is maximized. 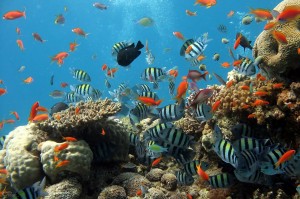 Along with ocean fisheries, land based fisheries and fish farms that operate from concealed water bodies also face controversies from environmentalists and conservationists. The main focus of these controversies has been on ecological balance such as using fish to feed fish, the use of pesticides, herbicides, and GMO based food that throws off ecological balance. Some of the fisheries around the world are using unethical techniques which are toxic and environmentally harmful.

Growing your own fish and vegetables on your rooftop can be a useful alternative to land based fish farming which will ensure that you use only processes that are organic and harmless to the environment. With urban farming, you are also able to improve air quality and reduce greenhouse gases form the city.

Aquaculture can be used effectively in urban areas to produce more food for growing urban populations. As we have seen in many of the projects around the world, any urban building can be used as a farm and can be configured as a vertical garden. The vertical farm building designs in Hong Kong or Germany appear to be something that you’d see on the cover of a science fiction magazine. However, an aquaponic rooftop for raising fish or other farm products does not have to be very complex.

A multi layered system can easily be used to produce fish and grow vegetables all year round on flat roof tops with a simple greenhouse. Metal plastic or glass fish tanks can easily be used for making your own greenhouse. Ideally, a tank would be placed on a flat roof on which vegetable trays can be mounted to grow plants. Excrement from the fish tank is then pumped to circulate the water into the vegetable trays to provide food for them. Most fish will excrete ammonia which is an excellent fertilizer for tomatoes, salad leaves and herbs growing in a greenhouse mounted above.

Scarponio, the creators of Globe/Hedron, writes in his article titled: Fish from the Sky with Vegetables. Globe / Hedron a Rooftop Farm. — Conceptual Devices, that “using this farming technique, Globe/Hedron is optimized to feed four families of four all year round.” He estimated that it could annually produce “100 kilograms of fish and 400 kilograms of vegetables, from broccoli and Swiss chard in the winter to tomatoes and eggplant in the summer.” (Rooftop Fish Farm Ups the Ante for Urban Agriculture : TreeHugger)

This concept design produces its own energy for its heating, cooling and pumping needs. The basic structure can also be adopted for different weather patterns or environmental conditions with insulation and greenhouse panels. This may open up new possibilities in urban farming as this system also address global energy crisis issues. This self sufficient system designed by Scarponio reduces operating costs, and sells for about the price of a small car.

More and more people around the world are efficiently growing food on their rooftops. Urban farming is becoming a promising way to tackle world hunger and food shortage issues. As more and more people move into the cities, urban farming is becoming the center of attention because of the environmental benefits as well as an answer to the food shortages around the globe.

We hope you will try growing your own garden this winter either using a fish tank indoors or using a greenhouse that you could easily put together on your rooftop.

For more information on aquaponic systems, please contact us. Click here to book a meeting with us.